LET THERE BE (PLANET) ROCK! As Planet Rock magazine reaches double figures, we welcome AC/DC, the world’s greatest hard rock band, to our cover. As we approach the first anniversary of Malcolm Young’s death we dig deep into the making of the band’s classic Powerage album, we tell the stories behind the Australian rockers’ 40 greatest songs, and we examine what the future holds for the band now that they’re back in the studio.

With Led Zeppelin celebrating their 50th anniversary, we look at their birth and vertiginous rise through the eyes of legendary music journalist Chris Welch, who had a ringside seat at their electrifying gigs and interviewed Robert Plant, Jimmy Page, John Paul Jones and John Bonham in London, New York, Germany and, on the night they premiered Stairway To Heaven for the first time, Ireland. Strap in, it’s quite a ride!

British HM icons Judas Priest too are fast approaching their 50th birthday. To mark the release of his autobiography Heavy Duty, we have a no-holds-barred chat with former guitarist KK Downing who reveals the truth behind both the band’s successes and their darker days.

Similarly revealing is our fascinating Confessional interview with Guns N’ Roses guitar hero Slash who spills the beans on the band’s hugely successful Not In This Lifetime… tour and opens up about his new love and new album.

Elsewhere in the issue we revisit the maverick, game-changing history of Faith No More, David Coverdale from Whitesnake shares his life lessons, we salute cult heroes Nazareth, and Deep Purple frontman Ian Gillan tells us about the rock’n’roll songs which soundtracked his teenage years.

In our Lives section we get down the front for Iron Maiden, get back in the saddle with Steven Tyler and get our brains scrambled by evil geniuses Ghost. And we critique new albums by Slash, Billy F Gibbons, Metallica, Joe Bonamassa, Muse and more.

As if that weren’t enough we also have exclusive chats with Clutch, Massive Wagons, Sammy Hagar, Monster Truck and look at mayhem which ensued when Thin Lizzy and Bad Company teamed up with football legend George Best!

All this and much more in issue 10 of Planet Rock, on-sale now!
Planet Rock issue 10
Skip to the end of the images gallery 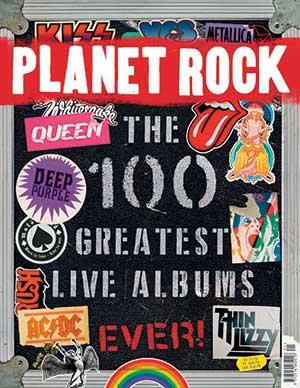